SPECIAL OFFERS | REVIEWS | IN AND AROUND | EVENTS | FOTO | NEWS |
THE FORTRESS OF PALMANOVA VENETO:

THE FORTRESS OF PALMANOVA VENETO 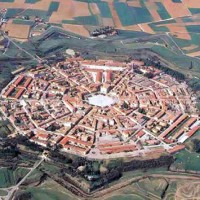 The fortress of Palmanova was conceived and built as a fortified border structure. It had a dissuasive role from the outset: it was at the time of the War of Gradisca, despite being far from completion, it worked as an advanced point for Venetian war operations.

His original name was Palma, a symbol of victory, in memory of the Battle of Lepanto.
The "nova" was added, two centuries after the foundation, by Napoleon Bonaparte, with the construction of the third fortified circle.
From July 9, 2017, Palmanova Fortress became part of the Unesco World Heritage Site, the transnational serial site "Venetian Defense Works between the 16th and 17th Centuries: State of the Earth-State from the Western Sea"

THE FORTRESS OF PALMANOVA VENETO